For the last two years, I participated in the ‘Back to the Classics Challenge’ that gave me an extra incentive to catch up with some good old classics and discover new favorites. This year I wanted to do something different. I have been wondering what is my geographical reading footprint for a while now. So, I decided to analyze my ‘read books’ list on Goodreads and see what comes out. As I mostly read in English or Latvian (my native language), it was unsurprising that I’ve generally focused on English, American or Australian authors as well as Latvian and Russian literature. My Goodreads record starts in 2012 and it’s only really accurate from 2016 but it still draws a pretty good picture of my current geographical preferences. According to the UN, there are 44 countries in Europe but I have read books only from 12 countries. So, I figured it’s time to make some changes. For the next 5 years, I’ll try to cover as many European countries as I can and post an update at the end of each year. I hope to add at least 5 new countries to my European reading map every year (even the difficult ones) and I’m really looking forward to my literary journey!

My Goodreads book list informed me that I’ve read books from authors associated with 12 European countries: Finland, France, Germany, Ireland, Italy, Latvia, the Netherlands, Norway, Poland, Russia, Sweden, and the UK (see the map below). Honestly, countries like Germany and Ireland barely made the cut which seems a bit insane as I’ve lived in Germany for 3 years during my studies but have managed to avoid any encounter with German literature (I was more successful with music and movies). Scandinavia produces some world-renowned crime novels that often get translated into Latvian which explains the decent coverage of Nordic countries. I visited Poland twice last year and Olga Tokarczuk won the Nobel Prize in Literature 2018 which led to a very positive introduction to Polish literature. France and Italy are difficult to avoid in the literary world, but the Netherlands seems to have joined the cluster mostly by chance.

Clearly, I have a lot of blanks all over Europe. My biggest disappointment is the Baltic States. I’m sure I have read something from Estonian and Lithuanian literature at school but I can’t remember anything. I’m not surprised about the Balkan region (I have a feeling it won’t be easy to get my hands on some of their books in a readable language). It’s a bit unexpected that Spain has been overlooked but I guess weird things happen. Also, I expected Denmark to have been in cahoots with the rest of Scandinavia.

Anyhow, my plan is to slowly fill in all my blanks on my literary map of Europe. And it includes a list of 32 countries! I’m not completely delusional; therefore, I have about 6 smallest countries in Europe under a very big question mark (I’ve put them in grey in the table below). I’ll try, but it just might not be possible. 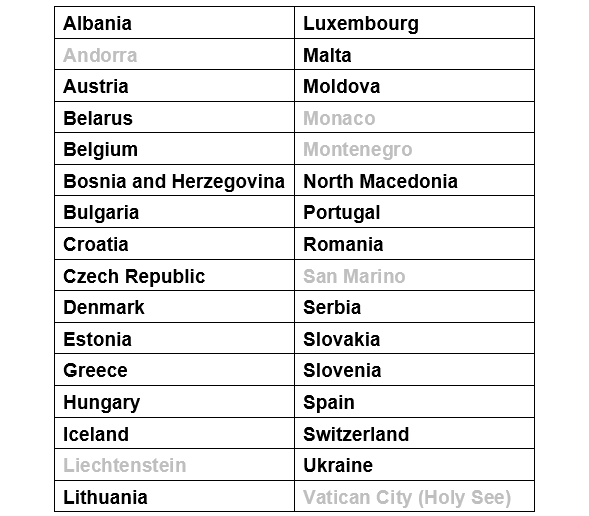 In 2020, I want to start with at least 5 countries: Estonia, Lithuania, Spain, Portugal, and Greece. I’ll probably read something from Estonian and Lithuanian literature in Latvian; therefore, I’ll choose the specific books later (I have a couple of novels in mind but I don’t want to make a final decision just yet). However, I have already picked something from the other three countries:

1. Spain – The Shadow of the Wind by Carlos Ruiz Zafón (Goodreads synopsis)

I don’t know how this book (or series) has escaped my attention but it won’t stay that way for long. I have already ordered it! 🙂

José Saramago is a Nobel prize laureate; therefore, reading any of his books will help me advance not only my geographical quest but also my attempts at reading more prize-winning authors of the serious kind. I found the synopsis quite intriguing, so I’m looking forward to this one for sure.

3. Greece – Why I Killed My Best Friend by Amanda Michalopoulou (Goodreads synopsis)

It was difficult to find contemporary Greek literature in English; therefore, I had to enlist some helpful online sources. It also didn’t provide a huge list of choices but I figured it was time to introduce a female author in the mix. The book synopsis reads like something I could relate to (not that I’m going around killing my besties), so I’ll give it a try!

I would be glad to receive any book suggestions to help me along the way. Or if anyone feels like doing something similar, just drop a comment below and join the fun. There is also an alternative European Reading Challenge organized by Rose City Reader if you just want to introduce more European literature in your reading list. It also seems like a fun thing to do!

One thought on “European Book Challenge”

Things I write about: